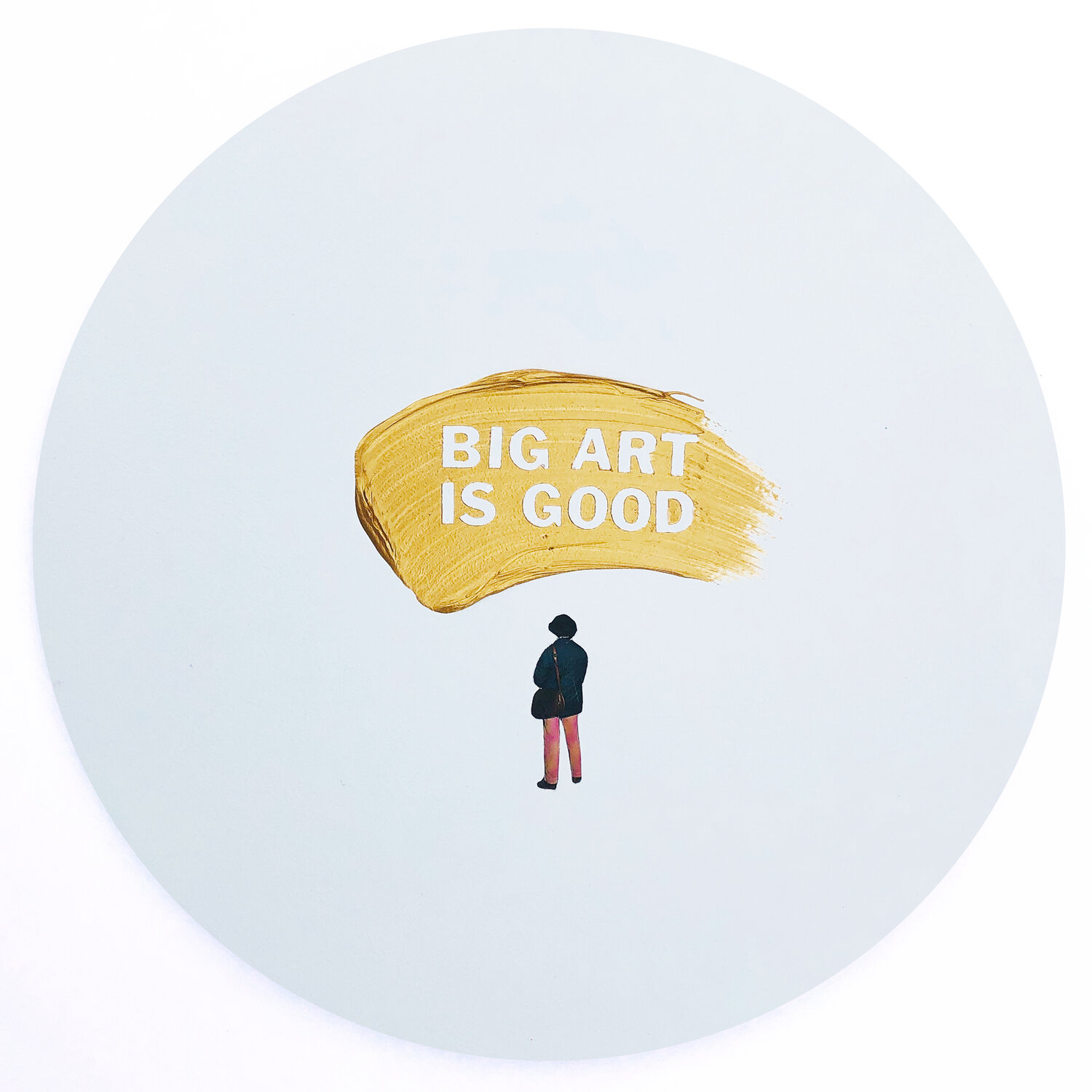 Driving through the industrial corner of South Nashville, it might be easy to pass by the hidden gem of Modfellows Art & Design — but once the garage door adorned with black “guitar” stripes inspired by Eddie Van Halen’s infamous design is found, it’s clear this gallery is off the beaten path for a reason.

Rich and Julie Modica, the powerhouse couple behind the gallery space, have brought the adage of “do what you love” to life with this passion project and created a welcome addition to the Nashville art scene. Pivoting from two careers in entirely different spaces (Julie in marketing, Rich in the music touring world), their longtime love for art, curation, and collecting has manifested into an inventive space showcasing the talents of upcoming and established artists alike.

Rich and Julie’s story is one of whimsy: Julie was living and working in New Orleans and met Rich at a radio event in a moment she describes as love at first sight. “It was almost like there was a light around him,” she says. “I wrote him my phone number with a note to the effect of, ‘I can’t wait to marry you one day.’” Her message came to be a reality — the two settled in California but grew ready for a change after the birth of their son. Rich had been traveling and working in the touring world since the age of fifteen and the couple found themselves seeking an opportunity that allowed for more steadiness and time together. When Julie’s job provided an offer to relocate to Nashville, they jumped at the chance — despite the fact that at the time (nearly fourteen years ago) Nashville was not the country’s hottest spot.

Now, in what has become America’s “it” city, Rich and Julie have brought their business acumen, musical roots, and passion for art into a cohesive creation in the form of Modfellows. Despite the industry change, Rich’s connection to the touring world hasn’t left him entirely — the gallery (located at 3655 Trousdale Avenue) was formerly a space used to house tour equipment, gold records, and tour buses themselves. Next door was a shop where the buses would be refurbished. In true Nashville fashion, the space has been transformed into something else entirely while still retaining the spirit of the building’s original purpose. Photos Rich himself took of rock and punk icons adorn the walls of the back office.

Rich and Julie have discovered an unexpected joy in the form of highlighting newer artists. “The shows are almost like children,” Julie says. “It’s impossible to pick a favorite. It’s so amazing to see an artist come in, see the space, hang their work, and leave with newfound confidence.” Most recently, Modfellows hosted a solo exhibition for Nashville-based painter Maggie Sanger in her first show, the walls whitewashed, allowing her architectural style of hard edges and bold patterns to shine. This exhibition is in sharp contrast to a previous show by pop art creator Nathaniel Covington who decorated the space in what he called Coaxial Shock, decked out with papier-mache monsters and science-fiction hallmarks. The gallery space itself is transformative and contains endless ways to mold and shift to the unique voices of its featured artists.

While Modfellows can’t be found on any of the city’s monthly art crawls, Rich and Julie aren’t discouraged by their status as pioneers, blazing a trail into a part of the city ready for an art scene of its own. Modfellows is able to host unique shows and events — with the added benefit of “a surplus of parking,” they specify with a laugh. Later this month, the space will shift once again, welcoming artist Danielle Krysa (who will be speaking at Nashville’s TEDx event) in a show curated by Pam Marlene Taylor, the curator at Nashville’s 21c Museum Hotel.

Rich and Julie hope their gallery and its events will help to remove the air of stuffiness, elitism, and exclusivity the art world can contain, instead creating a welcoming and open environment even for those that might feel they lack artistic expertise. Their mantra for curating and finding new creators to highlight is simple: no bad art. So far, Modfellows is living up to those words well.