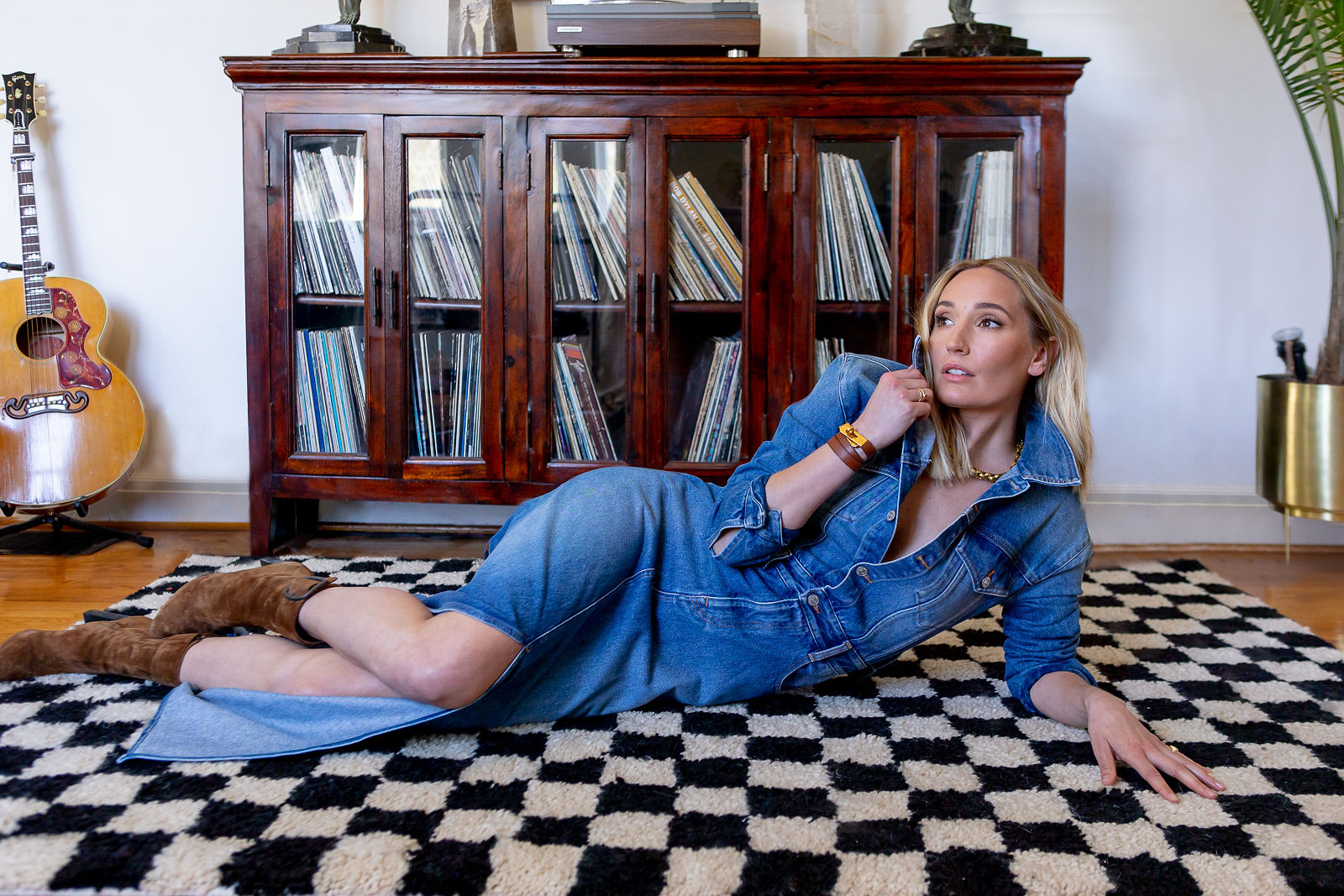 A few days after Ruby Stewart allowed our crew into her West Nashville abode, she extended a warm welcome and open-book attitude as we sat down over vegetarian bowls from Chopt to talk about life and long-term goals.

As an artist, she relates well to other creatives, and the habit of other locals spending weekend nights participating in home-jam music sessions until the wee hours is one of the things that made her fall in love with Nashville and making it home. Since she has been everywhere, carving out a home space in Music City was quite a unique choice. But her love for it stems from her nomadic upbringing and the eclectic mix of people that make her feel at home here.

What was it like growing up with your family being in the spotlight?

“I had a truly wonderful childhood. As a young girl, my primary home was Manhattan Beach, CA., with my mother, Kelly Emberg. She was always playing strong female vocal-based music around the house with favorites like Bonnie Raitt and Annie Lenox coming to memory as constant background there. I spent the summers and many holidays in England with my father where the music was mostly soul and Motown. My parents separated when I was just a toddler, so I don’t have memories of them as a couple. I do have strong memories of love from both sides, no matter what was happening or where we were traveling.

“ I always valued time with my father but knew he was away because he was working to take care of us. Both of my parents gave love openly while allowing us to experience the gifts of travel and being exposed to all kinds of people. It really was the best childhood, “ she says with a smile.

Growing up, you shared the same love of music with your dad. What was that like?

“My dad let me play my covers during intermissions on stage when I was on tour with him. I was singing for thousands of people and losing my fears while also learning from this continually expanding and changing ‘family’ that’s a part of being on the road touring,” she explains.

In her teen years where she was courted by Sony and Columbia Records at the age of 13 to write and record, eventually bowing out of the deal to just ‘be a child and live’ upon her father telling her not to follow what didn’t feel right at the time. She came back to music at the age of fifteen in a way that most performing artists will never get to experience.

You have always been an incredibly giving person, what are ways that you like to keep that giving spirit alive?

“I am a feminist and want always to be an advocate for women, especially those throughout the world who are not seen or are not given a voice. Education and outreach are outlets I want to support in a bigger way, and I believe it is my responsibility (perhaps fate) to spend time doing this.”

How have life experiences shaped the way you view the world?

“I am an empath, sometimes to a fault. When devastation struck Haiti, I went there for almost three weeks to help. On that trip, I learned the valuable lesson that we are all more alike than we think. People come to a more common level when faced with tragedy and desperation. I did things I never imagined that I would be able to, and it altered my entire being. From that point, I have been more concerned with how I make others feel in a much bigger way than I had been in the past,” she offers.

Ruby talks about the loss of her grandfather this year and how he was well-loved for providing second chances for countless struggling souls. She’s liking how this is shaping her as an adult, including what she’s being called to do next in terms of giving back and to what causes she wants to support most.

One dream outside of music that you’ve been wanting to fuel for years is to share your passion for women’s suits with the world fashion consumer. Tell us about your next venture.

“I am inspired by the 1930s and women like Marlene Dietrich, who sported power suits in times when women were restricted in clothing choices. That era’s films and personalities have always spoken to me, and I’ve also always been an admirer of smart-suiting and vintage styling in that arena over the decades. The design, fabric, and lines of the suits are critical, of course, but aligning with a philanthropic effort that speaks to my heart is just as important. I am talking to several non-profit agencies on how to best funnel dollars from the suit sales into causes most directly impacting the availability of educational and support resources for women who need it most. This isn’t an afterthought, but a part of the business model I am valuing from the start.”

As the daughter of a glamourous, Studio 54-era supermodel mother famous for Sports Illustrated covers and a rock-star father (known for wearing silk scarves and bold ensembles on stage and off), fashion and style have always been a big part of Ruby’s life. This project’s outcome is something we are all anxious to view more of in the months ahead as this cream linen design is the first debut of what’s to come with Ruby Stewart’s namesake line. If it’s as beautiful and lovingly layered as the songbird herself, we have something beyond fantastic to look forward to on the fashion front in the near future.